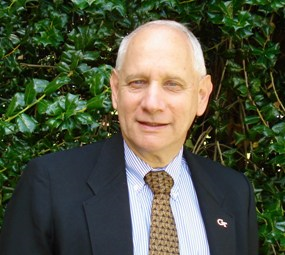 Oxidative Damage to DNA. The loss of an electron (oxidation) of duplex DNA results in the formation of a nucleobase radical cation (electron “hole”) that is subsequently consumed in chemical reactions that often lead to mutations. We have found that nucleobase damage need not occur at the site of the initial oxidation. Radical cations in DNA can migrate long distances (hundreds of Å) by a reversible hopping process before being trapped irreversibly by reaction with H2O and O2. A defining characteristic of this process is the preferential reaction at guanine. We showed that the reactions of nucleobase radical cations in DNA are determined by the specific sequence of bases that comprise the oligonucleotides. In particular, we observe that under certain circumstances oxidative reactions occurs at thymines despite the fact that it has a high oxidation potential. The consequences and mechanism of this reaction are under active investigation.

Conjoined DNA – Conducting Polymers. The creation of nanometer-sized molecular electronic devices requires the development of molecular nanowires that can effectively transport charge between functional components. The creation of such devices would be greatly facilitated if the nanowires were capable of self-directed connection enabling the efficient and scalable assembly of circuits. It has been widely recognized that the self-recognition and self-organizing properties of DNA may provide a means for the preparation of such self-directed nanowires and related structures. However, because of its inherent low conductivity, DNA itself is not useful for this purpose.  Remarkable progress has been made in recent years on various schemes to modify DNA to take advantage of its unique properties for application to molecular electronics. We are pursuing the preparation of conducting nanowires from DNA oligomers that have covalently linked monomers that are subsequently converted chemically or electrochemically to conjoined DNA-conducting polymers of precisely defined length and composition.