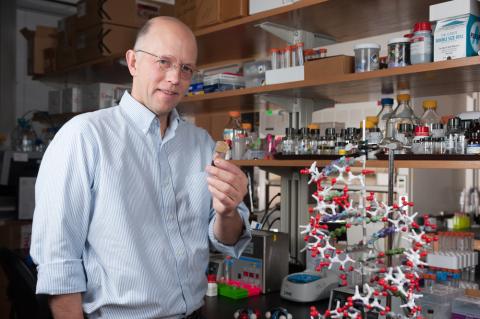 What distinguishes living matter from nonliving matter? Many scientists agree that it is open-ended evolution: life’s ability to continually evolve and flourish within its environment. When chemical matter gained the ability to evolve, it produced a stunning array of molecular structures and functions, giving rise to life on Earth.

Advances in chemistry have made it possible for scientists to take inspiration from nature as they attempt to create new chemical systems — networks or sets of interacting molecules — from nonliving matter in hopes of demonstrating the crucial matter to life transition.

The Alfred P. Sloan Foundation awarded $1.5 million to a team of researchers at the Georgia Institute of Technology as part of its new “Matter-to-Life” program. The team, led by School of Chemistry and Biochemistry Professor Nicholas Hud, seeks to develop novel chemical systems that evolve like those in biology but are made up of synthetic molecules not found in life. With support from the Sloan Foundation, the team hopes their systems can harness the power of evolution to produce molecules with properties that are currently unattainable and even unimagined.

“Life is the greatest chemist on Earth, and its power came about because life has the ability to evolve,” said Hud, who is Regents’ Professor, Julius Brown Professor of Chemistry and Biochemistry, and associate director of the Parker H. Petit Institute of Bioengineering and Bioscience at Georgia Tech. “The discovery of a novel chemical system with the ability to continuously evolve would bring about a new era in chemistry.”

Over the next three years, Hud’s team will use the funding to build upon their previous work in understanding how chemical matter gains the ability to conduct open-ended evolution.

For the past decade, Hud led Georgia Tech’s Center for Chemical Evolution. Their mission was to investigate the origin of life on Earth — specifically to figure out how the biopolymers we have today, like DNA, RNA, and polypeptides, could spontaneously come about from nonliving matter before there was biology. Over the years, the center’s researchers made significant advances and discovered molecules with properties similar to those of our modern biopolymers but that assemble better and faster.

The group formed a hypothesis — that perhaps the molecules responsible for starting life were not quite the same as they are today. They surmised that the earliest molecules of life likely had properties that made life easier to get started, and that dynamic environments on the early Earth likely played a big role in driving the matter-to-life transition.

For their Matter-to-Life program, the Sloan Foundation is less interested in the historical question of how life came about on Earth, but rather focused on the general question of how nonliving matter becomes living matter. Since Hud’s team at the center had already spent a decade identifying and working with molecules not in life today and was already moving away from focusing on life on Earth, they were primed to address Sloan’s research goals. With the center having reached the end of its maximum possible funding duration with the National Science Foundation, the Sloan grant came at the perfect time, allowing the same team members to pursue their long-term research through new avenues.

Hud and the team will attempt to create a chemical system that can build polymers that have a variety of different structures and functions, and that ultimately exhibit specific desired properties. To build their system, they will use a type of polymer — depsipeptides — that they believe can make the first step in the transition from matter to life.

Their system would start with a pool containing many copies of the types of monomers that make up depsipeptides. Then, with environmental changes to kickstart the process, the monomers will come together to make different sequences of the polymers. The polymers then become part of the ecosystem, too. While a lot of the sequences will break apart, some will persist. The key is to encourage the polymers that persist to replicate themselves and to recycle those that break apart back into the pool to keep generating new sequences, thereby obtaining a system where all the material eventually goes into polymers that are stable. If successful, the team will have demonstrated a rudimentary — but groundbreaking — form of synthetic evolution.

“If we can achieve evolution with a chemical system that provides a path for the evolution of a wider array of artificial polymers, doors will open for the rapid discovery and production of new materials, new catalysts, and new therapeutic agents,” Hud said.